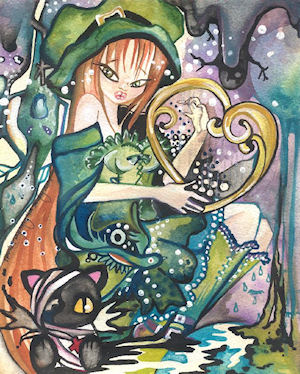 Harriet is a multidisciplinary visual artist, working in many mediums including charcoal, paint, installation and video.  Her work is an ongoing exploration of themes inspired by fairytales, nursery rhymes and mythology. "I am interested in ‘hermeneutics’ the art of literal translation, in attention to characters, events and symbols in a story’s underlying structure"
As an artist who has come of age in an era defined by popular culture her work is often described as Pop Surrealism exploring ideas concerning the mass media as a present and active part of the cultural consciousness.
These works contain a multiplicity of visual languages inspired by popular culture namely animation and childhood culture. Imagery and forms isolated from their original contexts in order to combine in new and unexpected ways.
These pop inspired images contain fragments of narrative that carry with them vestiges of their original meanings and yet in their new setting can also suggest other interpretations.


For a selection of work by Harriet Myfanwy Nia Tahany click here.

An Exhibition of UV Artwork

BYOB. Come and enjoy some tunes with our mystery DJ!! :)

The Fairy Frack Clash is an exhibition of Ultra Violet artwork by award-winning artist Harriet Myfanwy Nia Tahany. Harriet is based in rural Leitrim in the north-west of Ireland. Her new body of work explores the theme of Hydrolic Fracturing ("Fracking") through the whimsical depiction of fairies and land spirits in a fantasy-driven narrative, displayed in a awesome UV lit atmosphere. Harriet seeks to highlight a very real and current issue that threatens her County. The prospect of the gas industry making plans for a large scale gas extraction project that will irreversibly change the beautiful environment of her County, that has remained unchanged for hundreds of years. Harriet lives on the mountain top adjacent to Slieve Anierin, which is one of the best known summits in Leitrim. The peak is commonly known by it's Irish name, Sliabh An Iarainn, which translates as 'the iron mountain,' that guards the southeastern shores of Lough Allen.

An ancient Irish legend relates that the fairy folk, Tuatha De Danann, landed in Ireland in this very place: they descended in a thick mist and on discovering iron, forged metal weapons. With their superior armour, they then set to battle and defeat the Formorian tribe at the battle of Magh Tuireadh. Harriet's new work embodies a narrative of fairies, water and land spirits facing the dark environmental changes that this proposed gas project brings. Harriet hopes her work will further spread awareness across Ireland of the gas industry's plans.

The Fracking process leads to water and air pollution on a massive scale, and this is not just an issue that will affect Leitrim, Lough Allen is the first lake on the River Shannon, a river that runs through the whole of Ireland! Any water contamination will travel. The focus area is called 'the Lough Allen Basin region' which includes surrounding areas Sligo, Leitrim, Cavan, Donegal, Roscommon and Fermanagh.
Globally, Fracking is a highly controversial practice and has been banned in some countries, including France.
Earlier this year Harriet curated an environmental arts event in her County entitled ‘The Upset’, with work by over 70 artists and contributors in response to these and other current environmental concerns. There will also be a special screening of footage from the event, showing the artists talking about their work for The Upset and their thoughts on the prospect and issue of Hydraulic Fracturing. More information about ‘The Upset’ can be found at: www.theupsetleitrim.com

Harriet received her degree in Fine Art from Sligo's Institute of Technology, she won the prestigious RDS Taylor Art Award in 2007 and graduated from the University of Ulster in 2009 with a Masters in Fine Art. Harriet has exhibited in Belfast and Sligo this will be her 7th Solo exhibition and first in Dublin.

Email: use this form to send an email.