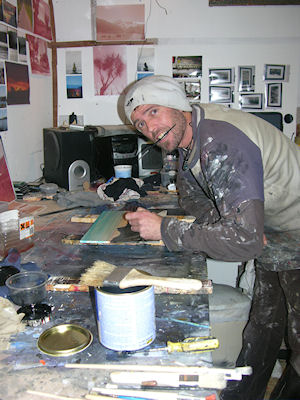 Jay was born in Cornwall in 1969. After leaving school in 1985, he began work with the electricity board and remained there until 1995. After realising a nine to five was not for him, he decided to embrace other cultures spending the next five years travelling through the U.S, Europe, Africa, Australia and Thailand, funded by menial work. While in Africa and Australia he became fascinated by the art of the indigenous tribes; mainly the ability to work in simplistic forms which catch and hold the eye.

In 2000 at the age of 31 he returned to college studying Art and Design at Falmouth college of Arts in Cornwall, specialising in Fine Art. It was here that abstract expressionism was to have a major influence; Jackson Pollock being the main inspirational figure. Upon leaving college he moved to Dublin, found a studio in the Docklands area and carried on painting, developing his work and absorbing the surroundings.

Jay now works from a studio in Co Carlow, at the foot of Mount Leinster. His more recent work has moved further from abstraction toward a style of impressionism; recording the change and development within the cities and towns throughout Ireland and in contrast the subdued tranquility of coastal and country life. A selection of Jay's paintings were chosen to go on display at Kevin Sharkey's gallery in 2006. He has work at the Sol Art Gallery, 1a Church Town, Co Cavan.

His work can also be seen at the Miriam Bailey Gallery in Bandon, Co Cork, The Destiny Gallery, Belfast., and at the Grange Gallery, Ballyboughal, Nth County Dublin which is having a solo show of his new paintings, running from 30th of October 08 for 6 weeks.


For a selection of work by Jay Walker click here.


This year he will be exhibiting new work at the following venues:

Solo show running for 6weeks from the 30th of October at  The Grange Gallery. www.thegrangedublin.ie

You can see Jay's painting's at Merrion Square, Dublin every Sunday. You can contact him through this website to make sure he will be there.